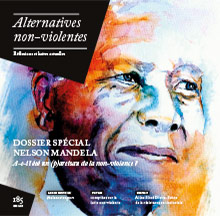 Nelson Mandela, the recurrence of violence, and prospects for deepening democratic change in South Africa

Nelson Mandela held a complex or ambiguous position on violence. Mandela played a leading role in launching an armed struggle against the apartheid regime in 1961. At the same time, he was awarded, in 1993, the Nobel Peace Prize for his role in bringing about a peaceful settlement in South Africa.

To make sense of his shifting positions on violence, one might want to relate this to the stages of Mandela’s life. These periods have sometimes been defined as leader, comrade, prisoner, negotiator and statesman[1]. In some of these stages, as student leader and as comrade in the period before he embarked on armed struggle, Mandela believed in civil disobedience and non-violent methods. Later on, and spurred on by the killing of 69 black protestors at Sharpeville in 1960, Mandela not only embraced violence; he took the lead in forming the armed wing of the ANC, Umkhonto we Sizwe. And while in prison, a twenty seven year stretch, he refused to renounce violence. Later, for his work in the statesman phase of his life and particularly for his role in bringing about a peaceful settlement in South Africa, Nelson Mandela received the Nobel prize.

One commentator, Raymond Suttner, acknowledges this duality but argues that Mandela was essentially a non-violent person[2]. Mandela had opted for violence when avenues for non-violent protest were closed down, but, he says, Mandela seized the opportunity to return to a non-violence and peace-making as soon as the possibility presented itself. Another voice Stephen Zunes argues that Mandela was, as he puts it, was pragmatic rather than ideological on the question of violence. He cites anti-apartheid church leader Allan Boesak who notes how Mandela eventually bowed to the strategic choice of the people, accepting their option for “largely non-violent” mass struggle.  “Mandela was a great leader because he recognized that the movement had become a civil insurrection, a largely nonviolent struggle. A great leader is one who recognizes where the movement is and leads them accordingly,’” Boesak said.

The important question is: How does Mandela’s utilitarian stance on violence influence community and popular attitudes to using violence in addressing social issues? In what way does Mandela’s past willingness to employ violence interrupt attempts to build a society based on dialogue, debate, bona fide negotiations, the absence of fear and resolution of political differences through the ballot box – all values  enshrined in South Africa’s constitution?

Currently, violence remains embedded in the fabric of South African life. Suttner has also expressed concern that the not enough has been done to fully embed non-violent in South Africa’s culture.

The Centre for the Study of Violence and Reconciliation (CSVR) has argued that violence has continued well beyond 1994 when the first democratic elections were held. The CSVR researchers have noted that ‘’(v)iolent crime and trauma are currently normative within South African society. Many commentators have come to refer to South Africa as a "culture of violence" - a society which endorses and accepts violence as an acceptable and legitimate means to resolve problems and achieve goals[3].”

Violence to be heard

South Africa, given the high levels of inequality, possesses ready-made conditions for tension and division [4] and – on too many fronts -- protagonists using violence during political contestation.

Against a backdrop of wage inequality, labour conflict remains high in South Africa. According to the Department of Labour’s Industrial Action report in the last ten years to 2015 SA had an average of 85 strike incidents, with 5.2 million working days lost and 335 000 workers involved each year. More than half these strikes are unprotected, which means they are not protected by law and employers usually summon police to try to restore order. In such conditions, workers all too frequently resort to violent methods which include attacks on fellow workers who break the strike, violent disruptions at pickets and violence directed at property during marches. According to academic Eddie Webster these levels are inordinately high and in 2012, according to him, was comparable to the heightened industrial conflict in the period that existed in the late seventies, when black workers were excluded from the collective bargaining system. During strikes in the platinum industry in 2012, 46 mineworkers were killed[5] .

According to Crispen Chinguno from the University of Witwatersrand's Society, Work and Development Institute workers use violence because they believed it worked. He said violence was a means by which workers come together for a common cause; it was also workers way of challenging inequality, exploitation and structural violence in labour processes.

There is a widespread civil unrest in South Africa. This takes the form of service delivery protests; collective community action over issues such as lack of housing, the desire for land and longstanding community demands for basic municipal services. Police reported in 2016 that violent protests was increasing. Cases of violent unrest have surged from 1‚226 in the 2011/12 reporting year‚ to 3‚542 in 2015/16‚ according to the latest crime statistics[6].

According to South African research agency Municipal IQ, violent protest activity remains a concern for many South African communities given its adverse impact on schooling, work opportunities and community safety. It notes that it is a matter of further concern that policing of protests appears to add another layer of violence further destabilising the already vulnerable relationship between communities and authority figures[7].

Karl van Holdt, author of a report on protests[8], argues that for community members involved, “(v)iolence is understood as a language, a message, a way of calling out to higher authorities about the state of things in their town but its violence makes it a warning at the same time.” This argues that collective violence is perceived by the community as “a means of forcing the powerful to acknowledge the dignity and legitimacy of the powerless and hear their collective demands.”

In the years 2015 and 2016, South Africa witnessed a dramatic rise in student protests. The protests occurred under the banner of a campaign referred to as #Fees Must Fall and disrupted the academic schedule at 14 universities. These protests turned violent – a violence which included a forceful police crackdown and the use of stun grenades and rubber bullets against student on the one hand and student action such as arson, burning of effigies and, in some cases, taking university officials hostage[9].  The universities will need to find R600m[10] (or 36,5million Euros) to fix or replace buildings damaged by students.

Some student leaders have made their position clear. For example, Bongingkosi Khanyile, speaking in September last year, said: “If [private security company] Mi7 decides to militarise this campus‚ we will moer them [beat them up].” Khanyile said such retaliatory action was justified since the police operate “with apartheid tactics.[11]”.

Academic Jane Duncan has examined why student protests have turned violent. She argues that violence in the protests can be linked to escalating policing and what she calls competitive escalation. In the case of the former she states that:  “If the police and private security guards are too quick to use violence – which has often been the case with the #FeesMustFall protests – these interactions socialise the protesters into violence.” This interrelationship, with both sides seemingly taking turns to initiate violent confrontation, has created violent cycles which are now experienced as a normal part of the #FeesMustFall protests.

The legacy of Mandela’s armed resistance to apartheid forms part of the situation in which violence remains embedded in the political culture. So does the history of the struggle against apartheid – a history that included violent methods of opposing the state. According to Robyn Dixon, Mandela is viewed by many South Africans as a “great man” because he was willing to use violence[12] and less so because he brought about peace. Many hold him in high esteem precisely because Mandela rebelled and overturned the ANC’s non-violent policy, Dixon says.

Now, more than two decades since South Africa’s peaceful settlement, there is a fundamental need to strengthen peacebuilding and entrench non-violence as a principle.  Building democracy, reconstructing South African society and ensuring a society in which everyone can enjoy their human rights requires that non-violence is much more widely accepted as a principle. In this regard Suttner argues “Non-violence is more than a tactic. It is a condition for peace …” He states that that non-violence is a condition for democratic social life, for dialogical relationship between equal subjects and to “push back the boundaries of patriarchy”. Another academic, Ari Sitas[13], reflecting on some of the adverse consequences of resorting to armed struggle, has similarly underlined the importance of non-violence and what he termed neo-Ghandian methods for building a post-apartheid South Africa. He warns that violent methods ultimately closes down political space and, when used to overthrow an old social order, often leads to a new order that is characterized by what he terms a militarism from above. He has argued that, in building a new society in South Africa in the present, a return to strategies such as non-violent problem solving, forming co-operatives and social voluntarism is vital.

If this assertion is correct – that non-violence is a condition for democratic social life in SA – then a great deal work needs to be undertaken. This work could involve, on the part of peacebuilders and ardent exponents of non-violence, continuing to emphasize the ways in which violence:

It would also involve working with Mandela’s legacy and, as far as possible, diluting the ways in which this legacy is understood and experienced as supporting the use of violence as a means to solve problems in South Africa today. It would presuppose interrogating and problematising our understanding of Mandela and his role, and doing so in a manner that disrupts and undermines the acceptability of violence as a political strategy. One way of doing this would be to present a more nuanced perspective Mandela’s stand on violence. This is what Suttner attempts to do when he argues that Mandela’s orientation to peace was so strong that he seized the opportunity to choose the path of peace as soon as such an option became available. But such an argument will not be convincing (and may even come across as an attempt to revise history).  Another way would be to advance the argument that Mandela in the end adjusted his position in response to the successful use of nonviolent strategies of resistance by the mass organisations operating within SA in the pre1994 period.

Beyond a re-engagement with Mandela’s legacy, what can be done to reverse the culture of violence in South Africa’s political life and beyond?

What can those concerned with peacebuilding, non-violence and a society without fear do? There is, of course, a broader agenda – they could continue working to addressing inequality, patriarchy and the unresolved traumas of the past. Within this, they could be more intentional, consistent and vigorous in challenging a new generations of activists about the widespread propensity to use violence in the quest for social change. They could work to break the romanticisation of the violent strategies of the past, and they could do so by continuously pointing out that:

South Africa’s people and leadership have notched up many achievements in their march away from apartheid and towards an inclusive democracy. There is still some way to go, not least in sustaining reconciliation, ensuring inclusive economic growth and overcoming the backlogs of the past. However the continuation of violence and a resurgence of violent political engagement threatens to halt progress and close down the democratic space needed to find sustainable solutions. Proponents of non-violence could do much more to directly engage those who espouse violence, even if it means revisiting and reframing the strategies used by Nelson Mandela in the struggle to end apartheid.